Yesterday I simulated 100,000 renewals of the Queen Anne at Royal Ascot by using recent (2018 on) RPR data from the 16 runners as a means of predicting how likely each horse was to achieve a certain RPR (and win, or place, in each simulation). The main goal of doing that was of course to pinpoint some value.

Although the one horse that seemed the most overpriced with the bookmakers when compared with the model (Stormy Antarctic) didn’t hit the frame, the early signs are relatively promising seeing as my model suggested the 14-1 winner Lord Glitters was roughly an 8-1 chance, and the 20-1 runner-up was around a 9-1 chance. While there was a lack of recent RPR data from which I could form a confident prediction for Hazapour or Le Brivido, they were both basically discounted by my model and neither hit the frame.

So, with that promising start now behind us, I am moving on to the Prince Of Wales’s Stakes, which is a good race to perform a similar prediction simulation with, given that most of the runners have a relatively comprehensive back-history of running in Graded/Group/Listed company and a lot of RPR data to work with.

I used exactly the same base method as described previously (see yesterday’s post for more information). Briefly, I: 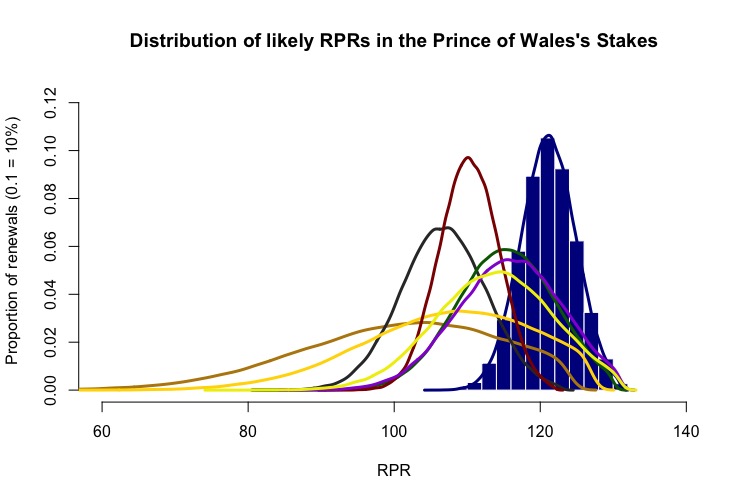 According to the simulations Crystal Ocean should be outright favourite at around 2.2 (6-5) and extremely short in the place market (around 1-10) —see Table below.

A model is only as good as the data that is fed into it. While RPRs are a relatively solid way of assessing a horse’s ability based on past performances, there are examples when you should be less confident in its use than others.

For example, as noted above, Sea Of Class is the one in this field that may be treated harshly by these simulations. I used her RPR mean and standard deviation in the same way as I did for all other runners to ensure uniformity, but she increased her RPR each time she ran last season, which suggests she was on a steep upward curve. Not only does she remain open to further progress this season, but the mean RPR and standard deviation used for her in these simulations may underestimate her seeing as she left her earlier form behind as she matured last season.

The RPRs used in this analysis were achieved on a variety of goings, tracks, and over different distances. The hope here is to obtain a sufficiently large sample of RPR data from which relatively reliable assessments of each horse’s ability and consistency can be made. In reality it is unreasonable to expect all horses to run to the same level irrespective of these differences in conditions (if it were to come up very soft, for example).

I will be using this technique to produce similar analyses for a few other races at Royal Ascot, and intend to use it to produce “fair odds” for Hong Kong racing beginning next season. HK fare is appealing for this type of analysis as there is a huge amount of ultra-reliable data available to work with and it is possible to hand-pick races in which the horses are exposed and have a lot of history that can be used to form solid conclusions about their ability. I plan to produce my own sectional-enhanced speed ratings for all horses running in HK and use these instead of RPRs to model “fair odds” ahead of many of the meetings.

2007 Vengeance of Rain, long time ago, pity they don't travel like this any more.

I tried one of the world's oldest soups, a broth that's been kept simmering for 50 years by 3 generations of a family. ... fuck that for a joke

Paul away this week. But with a few traffic jams and plenty of action at Rosehill on Saturday. Have gone through the meeting solo. No questions answered this week @tpaoz @TopSport_com_au
https://t.co/lJiKkdEgVt