Earlier this week I simulated 100,000 renewals of both the Queen Anne and Prince Of Wales’s Stakes at Royal Ascot by using recent (2018 on) RPR data from the runners as a means of predicting how likely each horse was to achieve a certain RPR (and win, or place, in each simulation). The main goal of doing that was of course to pinpoint some value.

The early signs have been promising. My model suggested Crystal Ocean was by far and away the likeliest winner of the Prince Of Wales’s Stakes as well as indicating that the first two in the Queen Anne had much better chances than the bookmakers thought. It additionally pinpointed a couple of shorter-priced fancies that looked under-priced (and which duly failed to make the frame).

Here I provide results for the Hardwicke Stakes after following the same method. This is a relatively good race to perform these simulations on, given that most of the runners have a relatively comprehensive back-history of running in Graded/Group/Listed company and a lot of RPR data to work with. However, the lack of a recent run from Masar makes things a bit tricky… 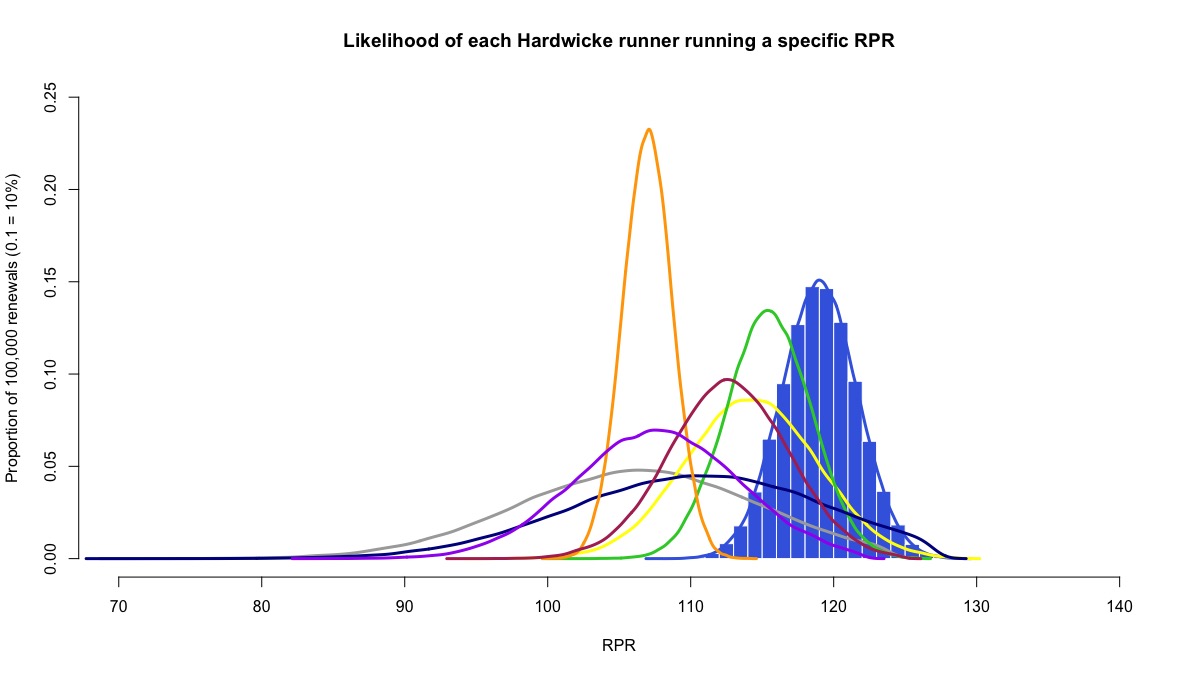 According to the simulations Masar should be outright favourite at around 2.1 (11-10) and extremely short in the place market (around 1-9) —see Table below.

As mentioned before, a model is only as good as the data that is fed into it. While RPRs are a relatively solid way of assessing a horse’s ability based on past performances, there are examples when you should be less confident in its use than others.

Of the three sample analyses of this type conducted this week, I am least confident about this one given the make-up of the race.

Masar has a massive chance on last season’s RPRs (both in terms of his ability and consistency), but this represents his first run following a long layoff after injury and it is not a given that he will return in A1 shape. Last season’s RPR data for him naturally inflates all the other runners’ prices as it makes him so short.

Morando is also an interesting case. He has the ability to run a good RPR but is one of the least consistent in the field. As a result, the simulations show him running figures sufficient to win around 1 in 8 renewals, which makes him second-favourite according to the model in the win market. However, his inconsistency makes him only sixth-favourite in the place market. His (dark blue) curve helps illustrate that he has a greater variation (from poor to excellent) in likely RPRs than any of the others.

Under different circumstances, I would argue that this sort of discrepancy is the golden nugget that this unique analysis can provide that would be missed by most punters – however, in this case, the RPR that suggests he can run a race-winning figure when on a going day comes from an eight-length win at Chester on soft ground (a specialist track at which form can be hard to rate, and in a race in which the highly rated runner-up may not have run anywhere near to form). That said, Morando won very easily, so anyone using these data to form an opinion on possible value must form their own conclusions!

👋 @mcacajamez! The star rider puts Meikei Yell through her paces this morning at Sha Tin... 👀