Continuing my race simulation analyses, I am this weekend looking at the Summer Mile at Ascot. As I have with other races (see here and here for recent examples), I simulated 100,000 renewals by using recent (2018 on) RPR data from the runners as a means of predicting how likely they are to achieve a certain RPR (and win, or place, in each simulation).

Thankfully the majority of the runners have a relatively comprehensive back-history of running in Graded/Group/Listed company and a lot of RPR data to work with, which means this should be a relatively good race to perform this sort of analysis on. 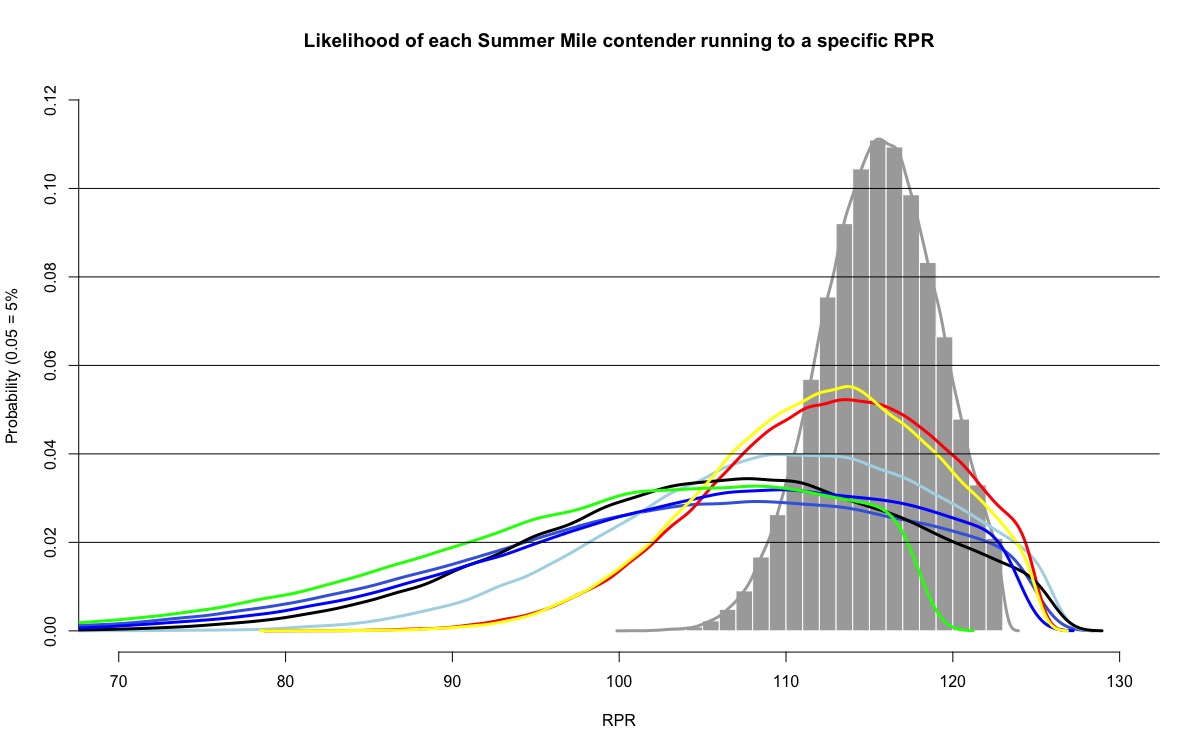 According to the simulations this is a more open race than the bookmakers’ odds would imply, with Matterhorn favourite at just under 4-1 (4.9).—see Table below.

RPRs are a relatively solid way of assessing a horse’s ability based on past performances, but there are examples when you should be less confident in their use than others.

Beat The Bank seems to be a bigger price than I would have expected based on his ability to hit the frame and to win the race. This is due to the simulations weighting his poor runs (low RPRs) equally when compared with his better ones. That is of course fair, but I suspect he is less likely to run a poor RPR in this company compared to the more competitive Grade Ones that have occasionally seen him run disappointingly. As a result, I am wary of taking his “fair win” and “fair place” odds too literally here, and expect he has a much better chance than they imply.

Accidental Agent refused to race last time, which presented a huge challenge regarding how to feed that into the simulation. I eventually decided to give him a pass – rather than entering a 0 – as I felt the latter option would have skewed his odds unrepresentatively when taking his ability into account. Naturally, I would be wary of backing him based on that latest misdemeanour.

I am trialling this simulation method from a punting point of view, and am tracking advised bets via a:

For the Summer Mile, the bets will be:

I may also look to trial it on the AW in the UK over the winter, as sectional times should be easy to calculate thanks to what is now available from certain tracks on the At The Races website.

Reply on TwitterRetweet on Twitter1Like on Twitter2Twitter
Load More...