Recently I have been simulating 100,000 renewals of high-class Flat older-horse Flat races by using recent (2018 on) RPR data from the runners as a means of predicting how likely each horse was to achieve a certain RPR (and win, or place, in each simulation). The main goal of of course is to pinpoint some value. The early signs have been promising.

Here I provide results for the Lennox Stakes after following the same method. This is a relatively good race to perform these simulations on, given that most of the runners have a fairly comprehensive back-history of running in Graded/Group/Listed company and a lot of RPR data to work with. 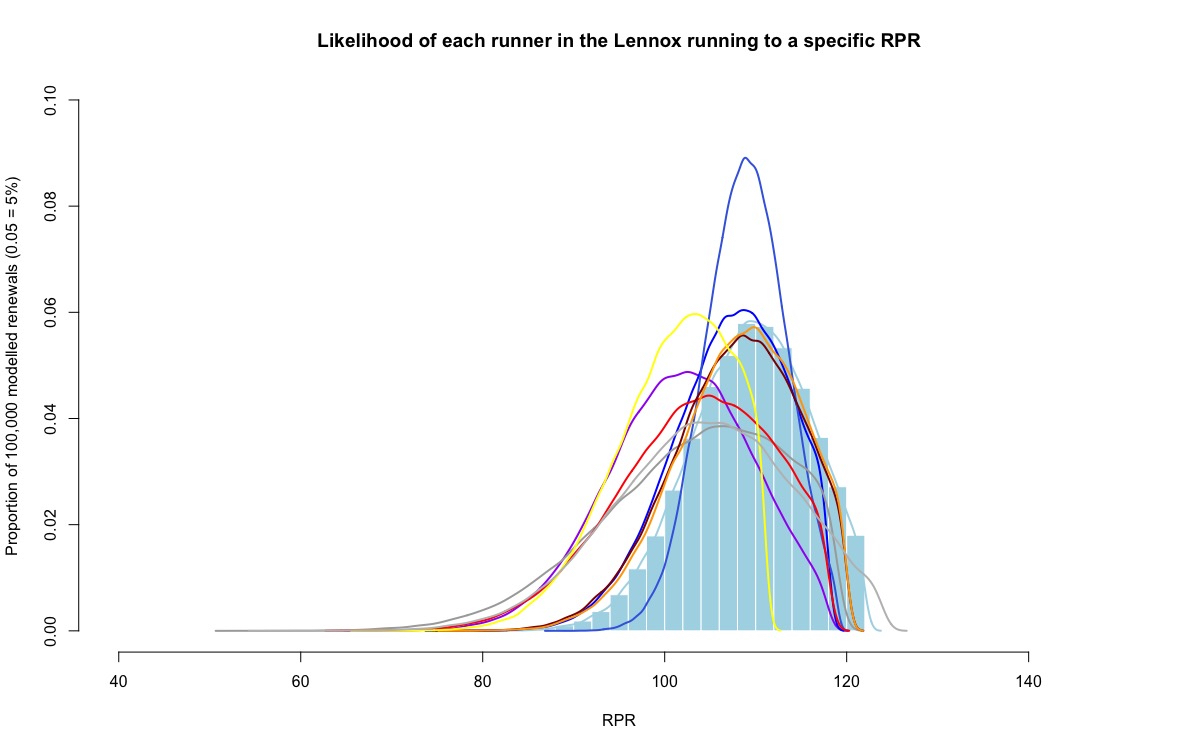 Shown above are the likely RPRs for each runner in the Lennox. The light blue bars and curve show Sir Dancealot’s likelihoods; the purple curve Breton Rock; the light blue Donjuan Triumphant; the blue (tallest peak) Flaming Spear; the grey Hey Gaman; the red Speak In Colours; the dark red Suedois; the orange Zaaki; the yellow Pretty Baby; the light grey Space Traveller.

According to the simulations Sir Dancealot should be outright favourite at around 5 (4-1) and in the place market (around 2.1 or 11-10) —see Table below.

I am trialling this simulation method from a punting point of view, and am tracking advised bets via a:

In this instance, I don’t see quite a sufficiently large discrepancy between my simulated odds and those available with the bookmakers to justify a bet.

The model is only as good as the data that is fed into it. While RPRs are a relatively solid way of assessing a horse’s ability based on past performances, there are examples when you should be less confident in its use than others.

Flaming Spear’s chances have been all-but entirely assessed on handicap RPRs, but these races present different tests to Group races. As such, I am not overly confident in the way the model has assessed him (although, for what it’s worth, the bookmakers have rated his chances very similarly).

The model essentially averages the achievements (RPR) and consistency (variation in RPR) of all the runners based on their performances (in most cases) under a variety of different conditions over the past 18 months. However, horses with notable preferences for certain conditions may be favoured (or hindered) much more than those assessments would imply today. An example in practice is likely to be Donjuan Triumphant, who would have a much better chance on softer ground (which he won’t get today). The model therefore likely overestimates his chances here.

📓A very popular part of @HKhutchi's #HH service and segment on The Triple Trio, is his Sweet In Defeat review!