My speed ratings (SRs) and sectional-adjusted speed ratings/visually adjusted ratings (SASRs and VARs) are useful for spotting future winners in their simplest form – by comparing one rating with another, you can see which horse has run faster and by how much.

However, there is always some error involved in the ratings and horses will never run to exactly the same level from race to race as conditions change (going, distance, track, draw, jockey etc.). As a result, it is not always as easy as simply betting on the horse with the highest ratings – particularly as these horses will often be short prices.

In my view, more often than not, the best means of spotting future winners among the ratings data that will be on offer at good value prices is to look for something unusual in the ratings/races that suggests a horse performed much better than casual punters would assume.

In this brief piece, I am going to look at the average performances (in SASR/VAR form) required to win or place in Class 3, 4 and 5 races so far this season (Races 1 to 86), with a view to pinpointing horses that have missed the places in such races yet run faster than would normally be required to win. These horses almost certainly have the ability to win/place in future contests but may not be sufficiently respected by the betting markets.

The below figure shows boxplot data for all horses running in Class 3, 4 and 5 races this season, grouped into one of three ‘Performance Groups’ where 1 = winners, 2 = placed horses, and 3 = unplaced horses.

Note that the circles extending beyond the whiskers of each plot indicate horses deemed to be outliers by the model. In most cases these can be ignored as they are horses who have been significantly over- or under-rated (having either received too-generous upgrades after running early fractions they couldn’t possibly sustain, or from being eased considerably once beaten so that their finishing times do not reflect their ability). 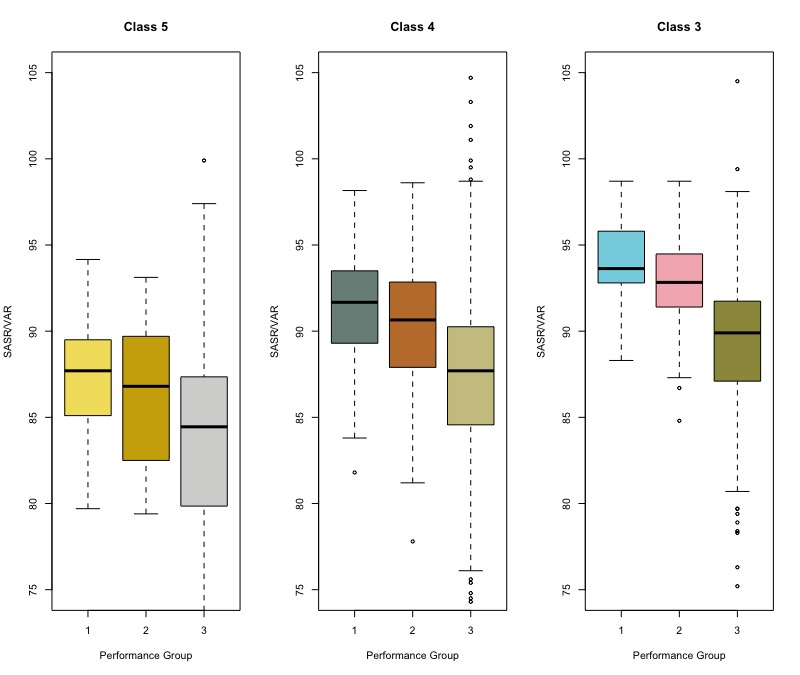 The broad trends are what you would expect: SASRs tend to be higher as you move up in class, and winners and placed horses achieve significantly higher SASRs than unplaced horses within each class (see the Table below for specifics).

It stands to reason that any horse that achieved a SASR above the mean SASR needed to win a race within each class yet missed the places while doing so is likely to soon set the record straight if racing in similar conditions within that same class.

Using that criterion (1) as a primary search filter (while omitting all horses whose SASRs significantly over-rated them – see note above), then (2) choosing only the two highest-rated horses if more than that appear from any one race, and (3) finally removing any that have subsequently won or placed, provides the following list of horses to follow:

As always, I would encourage anyone following these horses to scratch below the surface before doing so (e.g. rather than backing them blindly, I would suggest backing them when conditions seem favourable – not if they are poorly drawn, running on unsuitable going etc.).

Lot 489, our imposing Super Seth x Savodara colt heads to Hong Kong with C Fairman from @KarakaChat 👏 Out of a half-sister to G1 winner Sharvasti, and with his size and strength, he's a great fit for Hong Kong racing 🏇

“...today (Monday) we saw the internationals out in force and it was great to see a number of the strong Australian stables really active, but also the @HKJC_Racing...” - @KaneJones_NZ

Listen to the full chat below 👇

Our first purchase @KarakaChat is this powerful colt for $360k from @littleavondale for @HKJC_Racing. Out of a stakes-winning dam, he’s from the family of multiple G1 winner Westminster & will be well suited to Hong Kong.