This year’s Champion Hurdle doesn’t just lack a star so much as a galaxy, with Epatante the current pick of a sub-par crop of two-milers.

Given the uncertainty surrounding a number of the potential runners, many of which have alternative options (Honeysuckle, Envoi Allen etc.) and with the possibility of other smart types being supplemented (Benie Des Dieux, Cilaos Emery etc.), I am not particularly keen to get involved in the ante-post markets.

That said, I know many people will want to have a bet, and I have been intrigued to see a number of racing’s Twitterati putting up their ideas of value selections – many of which have been ridiculed by others.

My gut feeling is that if you are having a bet in such a weak, open renewal at the ante-post stage when going conditions (which could be hugely influential this year) are unknown, I would want to be on one at a big price, rather than one in single figures.

But as readers will know, I am generally driven by a data-based approach, so I thought I’d use a simple, old analytical technique to see if anything seemed obviously overpriced when recent performances and best odds available were taken into account.

I looked at the current entries for the race and then removed any of the horses in the race that I felt were unlikely to run (this was just my best guess, and others will no doubt have different views). Then, I noted down each horse’s best Racing Post Rating (RPR) achieved over hurdles this season (note I didn’t have a rating for Elgin, so used his most recent best figure) and ran a simple regression model to see how closely the best odds available were correlated with these RPRs.

Surprisingly, there is a big discrepancy, with only around 30% of the variation in odds explained by RPR – but there is a significant correlation.

In lay language, some horses are much shorter in the betting than their RPR best suggests they should be, while others are much bigger. You can see this in the graph below. 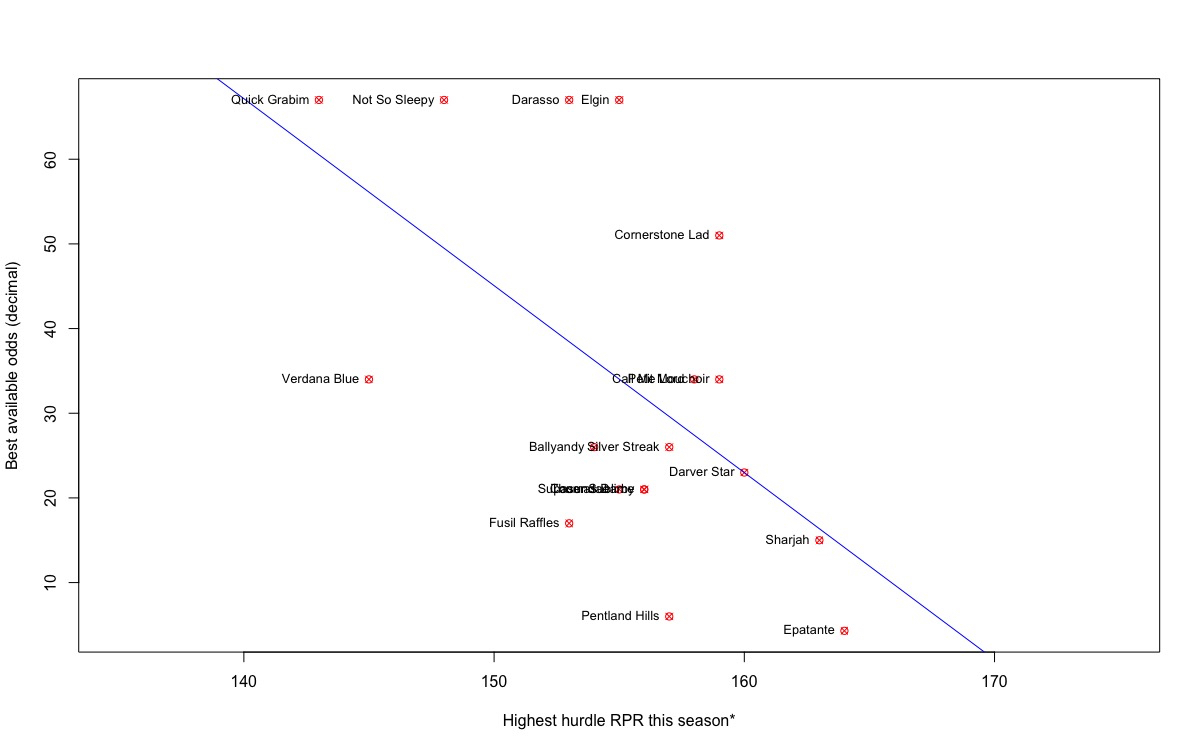 Of those to fall into the apparent value column, Cornerstone Lad, Call Me Lord and Petit Mouchoir are the obvious picks. Others to have run RPRs near the top of the pile that may be considered are Darver Star and Sharjah, who are essentially available at fair prices (falling on or very near the regression line).

Epatante looks to be too short, although she has run the best weight-adjusted RPR of the lot, so it’s not a particular surprise, and she obviously has more scope for progress than most. Pentland Hills is, however, very short given his best RPR, albeit he is still open to improvement as well.

Verdana Blue’s sole run this season produced a very poor RPR that makes her look bad value. However, if bouncing back to her best of last season, she wouldn’t look nearly such bad value and isn’t one to totally dismiss if the ground was to come up in her favour (she much prefers top of the ground).

I performed the analysis before Cilaos Emery had won at Gowran yesterday and he has subsequently been confirmed as a likely supplementary (and runner) in this. His RPR of 160 is one of the best this season but his top price of 8-1 (9.0) puts him the wrong side of the line from a value perspective. His hurdling will need to improve in any case, based on what he did yesterday.

🎯👏 Four of Paul @TheAsset180 Nicholson's five all-time great matches have been revealed, but which will be last?

Retweet if you remember this classic Nike advert!

Thanks to @BreanSands @NewburyRacing for the prize donations, @UnibetRacing for their continued support, @RichardHoiles, @kerry_wilmot and everyone who has taken part and supported in any way 💚 #MentalHealthMatters

"I felt like he was airborne and was high steaming from the top of the straight."

Reply on TwitterRetweet on TwitterLike on TwitterTwitter
Load More...