Compiling your own betting tissues is easier than you probably believe. There are many different ways to tackle the same basic problem, but the below diagram provides a simple-to-follow framework to help you get started. 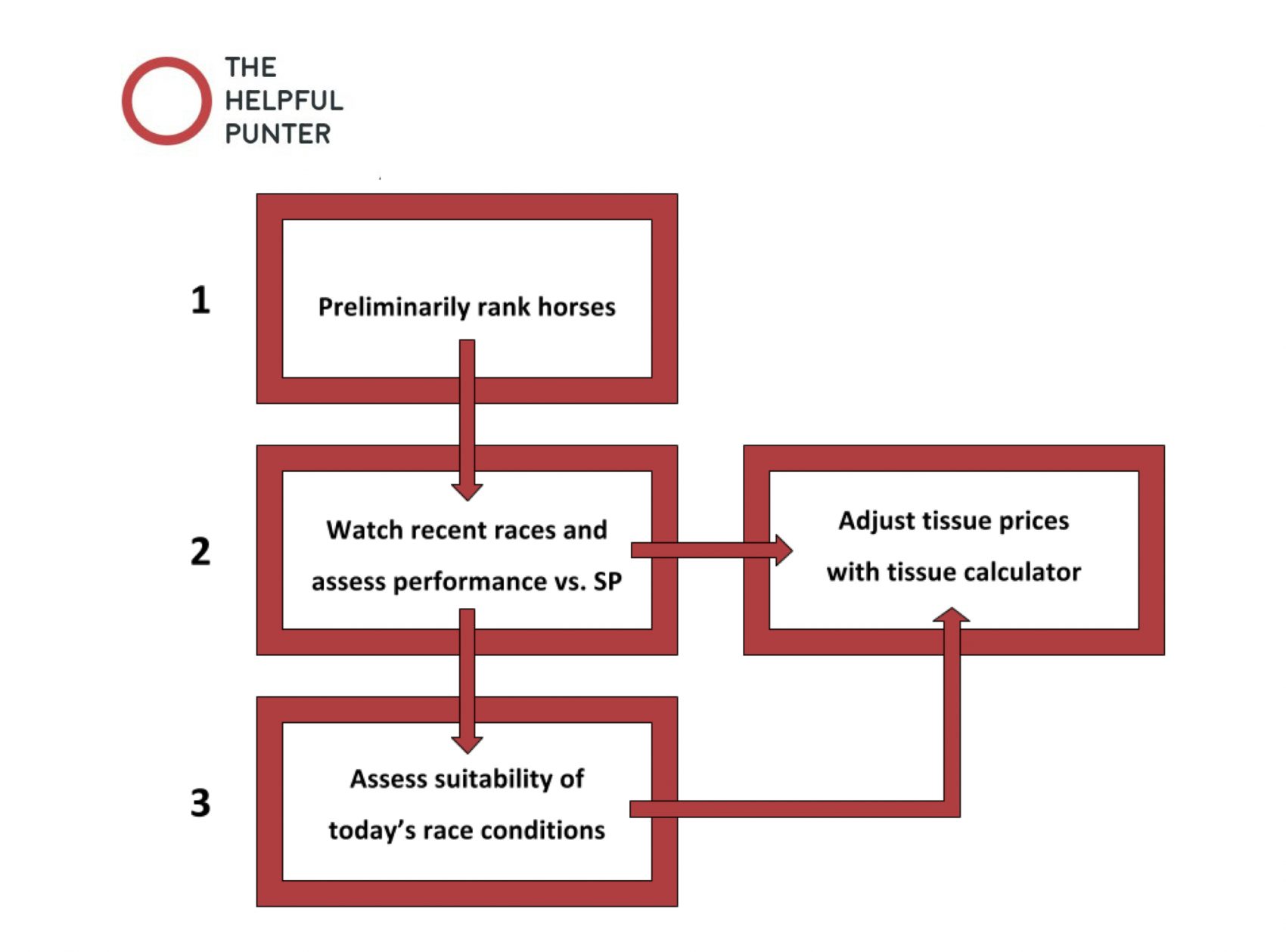 Firstly, you should preliminarily rank horses based on their likely chances of winning. Don’t worry about the odds at this point; simply list the horses in some sort of order that relates to their chances.

a) If you are compiling a tissue for a handicap race, you should start by checking back over each horse’s last two or three recent runs and note their finishing positions and SPs. Horses that have recently won or been placed are likely to be shorter in the betting than rivals that haven’t, and those that were relatively well fancied in the betting in their recent runs will likely be relatively well fancied again.

b) If you are compiling a tissue for a non-handicap race, you should initially consider what each horse’s official handicap mark is and how this relates to the weight it is carrying. Some horses will be carrying more weight against their rivals than they would be in a handicap, and are therefore likely to face stiff tasks. On the flip side, some horses will be ‘better off’ than they would be if they were meeting the same rivals in a handicap and are therefore likely to have decent chances.

To work out how much of an advantage/disadvantage each horse has, it is useful to calculate how much better/worse off they are. For example, a Grade One race might have five runners, all of which must carry 11-10. If those horses are officially rated 168, 165, 164, 160 and 157, it is clear that some have pretty hard tasks if the handicap marks are roughly accurate. For example, the horse rated 157 would carry 11 lb less than the one rated 168 if the race was a handicap, so would be effectively 11lb badly treated in this race. As a result, it likely faces a difficult task and its odds will likely reflect that.

Once you have considered the weights each horse must carry relative to their handicap marks, you should also take into account their recent finishing positions and SPs as you would when assessing handicap races. You may reshuffle your order slightly based on this information.

Note: Generally, official handicap marks are more accurate as horses gain experience; with every run the handicapper has more information to accurately assess a horse’s ability. As a result, young, inexperienced horses may possess handicap marks that are not all that accurate. For example, a horse that has only had two runs and won a novice hurdle last time may be capable of considerably more than its current handicap mark implies.

Next, you should WATCH each horse’s last two most recent races and see how the horse performed. Pay particular attention to its most recent race. If it ran better than its SP suggested it would, you would expect it to be shorter in the market this time, whereas if it ran more poorly than its SP suggested it would, it will likely be bigger. The extent to how much better/worse it ran than its SP indicated will give a clue as to the extent to how much shorter/bigger you might expect it to be today.

If possible, then watch how other horses from each horse’s last two races have run since. At least check the form of those horses in subsequent races to get a sense of how competitive the races were; they can vary considerably. Obviously, a horse that was fifth last time in a race that has produced subsequent winners will likely be shorter today than another one that was fifth in a race that has not.

At this point, you can begin inputting your working tissue prices for each horse in the tissue calculator.

Next, check the suitability of today’s conditions based on a horse’s past performances. By far the most important conditions that affect performance are the going, and then the distance, and class of race. Many horses are only effective on one type of going, while some have marked stamina limitations. Others will have good records in certain classes of race but struggle when upped to higher levels. The best plan is to look through a horse’s career record and note down what you feel its ideal conditions are.

Now use the table below to consider how suitable today’s race is likely to be in comparison to the conditions each horse faced on its most recent run.

When assessing suitability based on a comparison of today’s conditions to the conditions each horse faced on its most recent run:

For each higher-order concern:

For each lower-order concern:

Note that if you are unsure of anything, mark 0 (for example, you may not be sure if a horse will act on a downhill track if it has never run on one before). Again, young, inexperienced horses may be harder to evaluate (they may not have had many opportunities to prove their stamina at a certain trip, or have never run on heavy going before, for example).

The range of race suitability for each horse in the race you are assessing is +6.5 to –6.5. Once you have the numbers for each horse, you can use them to help you refine your tissue in the tissue calculator. Obviously, a horse with conditions much more in its favour today than in its most recent race is likely to have a shorter SP than last time, and the opposite is true for a horse that has less in its favour.

After you have completed those steps you should have a betting tissue that you are relatively happy with. Make any final adjustments that you feel are needed and then finalise your tissue prices.

Because there is virtually a 100% chance that one horse will win any given race, the odds of all runners, when adjusted to percentage chances of winning, should add to 100%. A four-runner race in which all the runners have the same chance of winning should see the four horses priced up at 4.0 / 3-1 (25%). Add the percentages up and you hit 100%.

Note that at 100% you could bet on each horse and break even, no matter which horse won. In reality, however, bookmakers are not this generous. They build a safety margin around the odds they offer of about 1 – 1.5% per horse; in other words, the odds are 1 — 1.5% worse than they should be for each horse. In this example, the four horses would likely be priced up at about 3.8 (26.3%). Add the percentages up and you hit 105.3%. At 105.3% if you bet equally on each horse you would lose 5.3% of your total stakes whichever horse won.

When using the tissue calculator to finalise your tissues, I suggest you allow yourself no more than 0.5% safety margin per runner. So, for example, in a 10-runner race, you should be aiming for a tissue between 100 and 105%.

Very often, even if you are working on races that feature established horses with a lot of form to their names, there will be at least one ‘wildcard’ that you need to assess. This is a catch-all term I use to refer to any horse that is hard to get a gauge on. It may include horses that are having their first runs:

My advice is to initially price the race up as though these horses are not running, and then to take a ‘best guess’ as to where to insert them in the betting. To give yourself a helping hand, instead of allowing 0.5% safety margin for these horses, allow yourself 1% — 1.5%. If possible, you might be able to ‘borrow’ this by allowing yourself less of a safety margin around others in the same race. You can then use the ‘excess’ to assign to the wildcard, thus erring on the side of caution when pricing it up.

Note that to begin with, as you are learning to compile odds, I recommend you don’t bet too heavily (or at all) in such races, but it is a good idea to compile odds for them to learn how to deal with such horses (and races) for when you are ready to tackle them for betting purposes. Generally, this technique will result in your wildcard being priced a little too short in your tissue. Tread cautiously but be prepared to be flexible when it comes to interpreting betting opportunities in such circumstances.

Reply on TwitterRetweet on Twitter1Like on Twitter3Twitter
Load More...