Clan Des Obeaux put up a towering performance to win the King George for a second successive season in December. If he could repeat that form at Cheltenham, he would certainly be a potential winner of the Gold Cup in March. But many believe he doesn’t act as well there as elsewhere, and that the trip will stretch him.

While it is true that he is winless from five visits to Cheltenham, I wouldn’t be so quick to discount him. Here’s why.

If you split his last five seasons into Cheltenham and non-Cheltenham runs, and compare the Racing Post Ratings (RPRs) he has achieved, you’ll see his level of performance has not been significantly different (except, possibly, in 2016/17, when he actually achieved a far higher RPR on his sole visit to Cheltenham than his average elsewhere).

Admittedly, there is not much data to go on from a statistician’s perspective, but with that in mind, I would want to see a convincing pattern one way or another to base my punting decision on Clan Des Obeaux not operating at his best at Cheltenham.

What we all know is that Paul Nicholls is a master trainer, who has time and again shown that he can bring horses on over their careers, and that he is especially gifted at getting chasers to fulfil their potential. He is also a multiple Gold Cup-winning trainer.

The figures above show a steady improvement in the level of form that Clan Des Obeaux has shown from season to season, which suggests he very much fits into the mould of a top-class, well-nurtured Nicholls chaser. That is true whether you separate them into Cheltenham-only performances or non-Cheltenham performances. Given that I can’t see any significant difference between the two groups of data, I combined them into one set of figures per season. The trajectory is shown below. 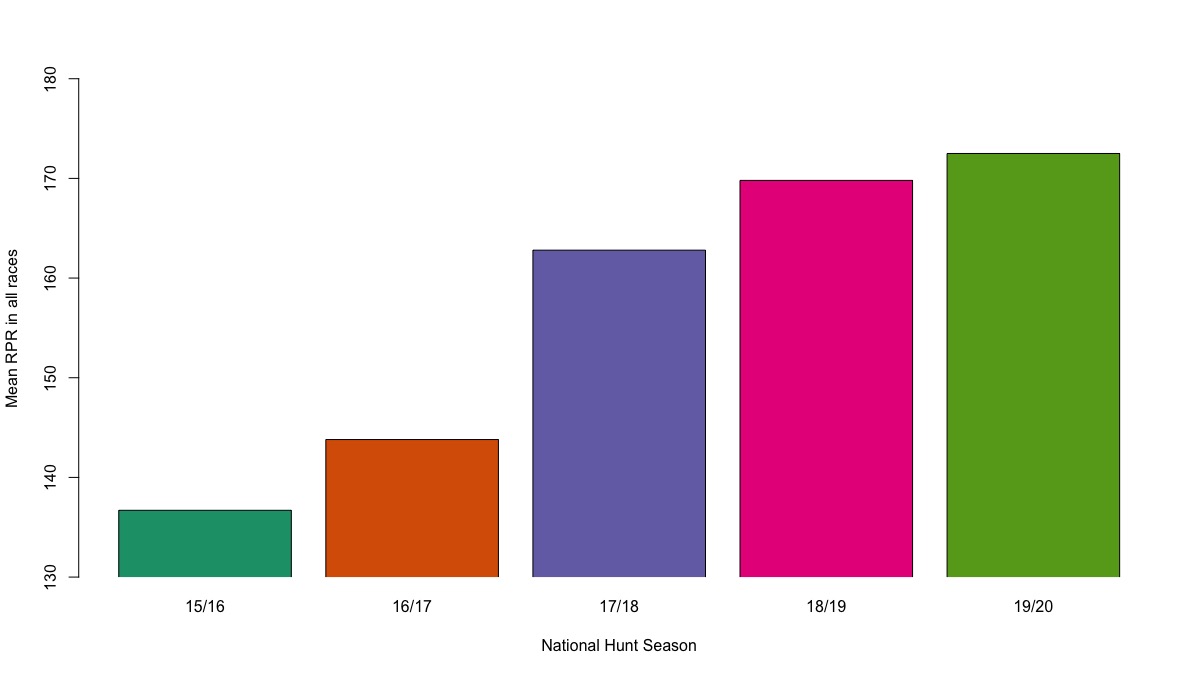 Since becoming a fully fledged (non-novice) chaser we’ve seen Clan Des Obeaux improve a little bit each season; to add substance to the belief that he is still improving Nicholls has said he is a stronger horse this year and his most recent RPR in winning the King George was his best ever. It was also the joint-best RPR recorded this season. The other 179 was Cyrname’s defeat of Altior at Ascot, before he was a victim of Clan Des Obeaux’s in the King George.

With all this in mind it’s fair to think Clan Des Obeaux will run to a very high level once again in the Gold Cup, and if the going is slightly better this year than last (which is perfectly likely as it was testing last season and rain arrived on the morning of the race) he will have every chance of seeing the trip out more strongly. He will also go there a fresher horse, and that could be an important factor.

In short, the figures suggest he could be the most obviously over-priced horse in this year’s race at a current best price of 9/1 with William Hill (Coral offer 8-1 NRNB, which of course guards against the possibility of a setback hitting ante-post players).

This week on HK Direct: @edward_sadler caught up with legendary trainer John Moore to discuss his G2 entrants Beauty Generation, Aethero & Thanks Forever at Sha Tin tomorrow as well as his future beyond this season.
#HKracing

@Robin_Mounsey @TorsFraser That's wonderful, Robin. Many congratulations to you both and thanks for sharing some really good news.

Hasn’t Nawaz actually built a career out of the ‘reformed terrorist’ thing?

BREAKING: The Irish Government are set to extend the #COVID19 lockdown past April 12th based on advice from the National Public Health Emergency Team.
Current projections would see at least another month of restrictions
Stay safe💪#CoronavirusLockdownIreland

“Nothing stops me. It’s all about having the right equipment to get you in the right places and get you through the day.”